Brief Summary: The answer to, What happened to Voyager when they got home?

When Star Trek: Voyager ended, most felt it was too abrupt. Seven years lost in the Delta Quadrant, and they find a way home. Minutes after returning ... cue the end credits.

That's it. No epilogue. No answers to any questions one might have. What becomes of the crew? How will Seven be treated? Will the Doctor become a superstar? No. The series answered, nothing. Those who saw the film Star Trek: Nemesis learned that Janeway was promoted an Admiral. And that really is it.

So it is fitting that a continuation line of novels answered these questions. The first two in this line (Homecoming, The Farther Shore) really should be treated as one novel. Outside of a "to be continued.." type ending in the first, there is really no sense of difference. Same author, plot lines, etc.

Initially, in the first chapter of Homecoming, we get some of what we wanted from the last episode of the show. An epilogue. The story picks up seconds after the series ends. We see such things as Tom Paris finally reuniting with his father and other sequences you would have expected. When the crew leaves the ship and returns home for the first time, they are greeted, and you get the expected promotions ("Finally!", says Harry Kim). And then ... the book really drags and becomes just another story for almost the length of the entire first novel. The Doctor and Seven aren't quite accepted by the general populus, Icheb gets beat up in his first weeks at the Academy, and The Captain reunites with her old fling, Mark, who was mentioned many times in the series, in this bizarre relationship where she almost feels like his second wife (he did get married after all those years after he thought she was dead). These sequences are quite awkward actually.

Well after all the plotlines are established, the crew thoroughly split up, a Borg virus, a Hologram revolution, a couple others less interesting tie-ins, we are brought into the second novel, The Farther Shore...

I freely admit, despite a complete cliffhanger, it took me a full year to find enough motivation to continue.... and I am glad I did!

The Farther Shore took all the plotlines established in Homecoming and brought them together in a nice resolution. The character development was spot on--I felt like the dialog could have been from any episode, even Data showed up from the Enterprise and added an element that didn't exist in the first novel.

In the end, with everything wrapped up nicely, and the crew working together again, we come full circle and finally feel like we get an epilogue ending that the series didn't give us, and for that, a year after I picked up the first novel, I was finally grateful that the investment was worth it.

More information on Homecoming at Amazon.com

More information on The Farther Shore at Amazon.com 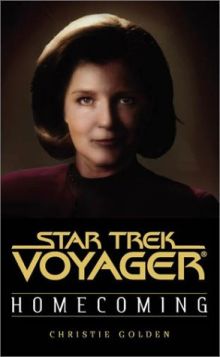 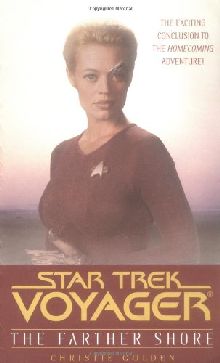